As the year 2021 began, the OWSD Zimbabwe National Chapter continued to run the science online webinars as a to cope with the new norm created by the COVID 19 pandemic.

As the year 2021 began, the OWSD Zimbabwe National Chapter continued to run the science online webinars as a to cope with the new norm created by the COVID 19 pandemic. The science webinars have had a huge impact on man, women and students in science and other areas of life. On the 3rd of February 2021, the OWSD Zimbabwe National Chapter Vice Chair Dr. Zviregei Jiri reintroduced the National Chapter to new members of the OWSD. The presentation was a recap of the objectives, goals and accomplishments of the chapter also not forgetting benefits of becoming a member of the OWSD.

Ms. Siphathisiwe Moyo gave the opening remarks welcoming everyone to the first 2021 talk. She encouraged members to join the organization and enjoy the benefits of being a member. She also shared on the continuous development of individuals through educational platforms. Education is the most powerful weapon you can use to change the world.

Dr. Zviregei Jiri dived into a very informative presentation on the OWSD Zimbabwe National Chapter. The organization was birthed from the Organization for Women in Science for the Developing World (OWSD) based in Italy, Trieste. The OWSD is a subunit of the UNESCO. OWSD was created to address the lack of representation and participation of women in science from developing countries. OWSD is an international organization committed to promoting women’s access to science and technology and increasing their participation in decision-making processes for the development of their countries and in the international scientific community. The OWSD has National Chapters and Zimbabwe has its own national chapter. Dr. Jiri also highlighted on the components of a national chapter. An OWSD National Chapter is constituted by a group of OWSD members (individuals and/or institutions) that fully support the objectives and activities of OWSD and aim to enhance and promote female participation in science and technology professions, in scientific leadership, and in the decision-making processes, both at the national and regional levels.

The OWSD Zimbabwe National Chapter was launched on the 16th of November 2018 and it is housed under the Zimbabwe Academy of Sciences (ZAS). The Zimbabwe National Chapter follows the objectives and goals of the OWSD International. The Objectives include to inform women from Zimbabwe and the region about opportunities to access higher education in science including the OWSD PhD and Early Career fellowships and also to encourage and support women in their careers as scientists just to mention a few.

The presenter also shared on the significance of the Zimbabwe National Chapter logo. The logo depicts a woman passing on scientific-symbolized by the atom-to a small girl. It also represents Zimbabwe cultural values, the gesture also embraces the importance of social science and involving communities. The colors are those found on the flag of Zimbabwe. The National Chapter Chair also presented on the achievements of the Zimbabwe National Chapter. The organization has managed to host scientific writing workshops, webinars, mentorship and career guidance workshops just to mention a few. 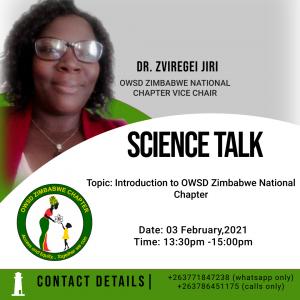